Kicking off this year's entrepreneurship challenge!

The AT Entrepreneurship class will be giving their final pitches on April 24th in the Little Theater
at 7:30 PM. All are welcome. Our AT students have been working feverishly, prototyping, testing
and reiterating based on feedback. The teams have focused on problems they identified from
visiting the Sunshine Children's Home, and through interviews and research. Several teams are
trying to create connections for non-verbal children through apps or websites. Other teams are
working on games that teach cause and effect and create a sense of community. Another team is
creating a 3D printed rail system for mounting medical devices on a wheelchair. And one team is
working on an adaptive shirt for children who can't dress themselves.

Gary Sheinbaum, CEO of Tommy Hilfiger Americas, and Mindy Scheier, President and Founder of
Runway of Dreams, gave a presentation about their adaptive clothing line. Afterwards, they listened
to teams pitch their ideas and gave feedback. Our students were invited to work with the PVH
Innovation team and we visited their headquarters where students pitched their ideas and received
feedback.


We are pleased to announce that one of our teams, focusing on adaptive clothing, has won
the No Barriers Global Impact Challenge for their design. This team consisting of seven seniors,
received a check for $5000 from Wells Fargo and No Barriers to continue work on their prototype.
They will also be attending and presenting at the No Barriers Summit 2019 in Lake Tahoe, California
in June. 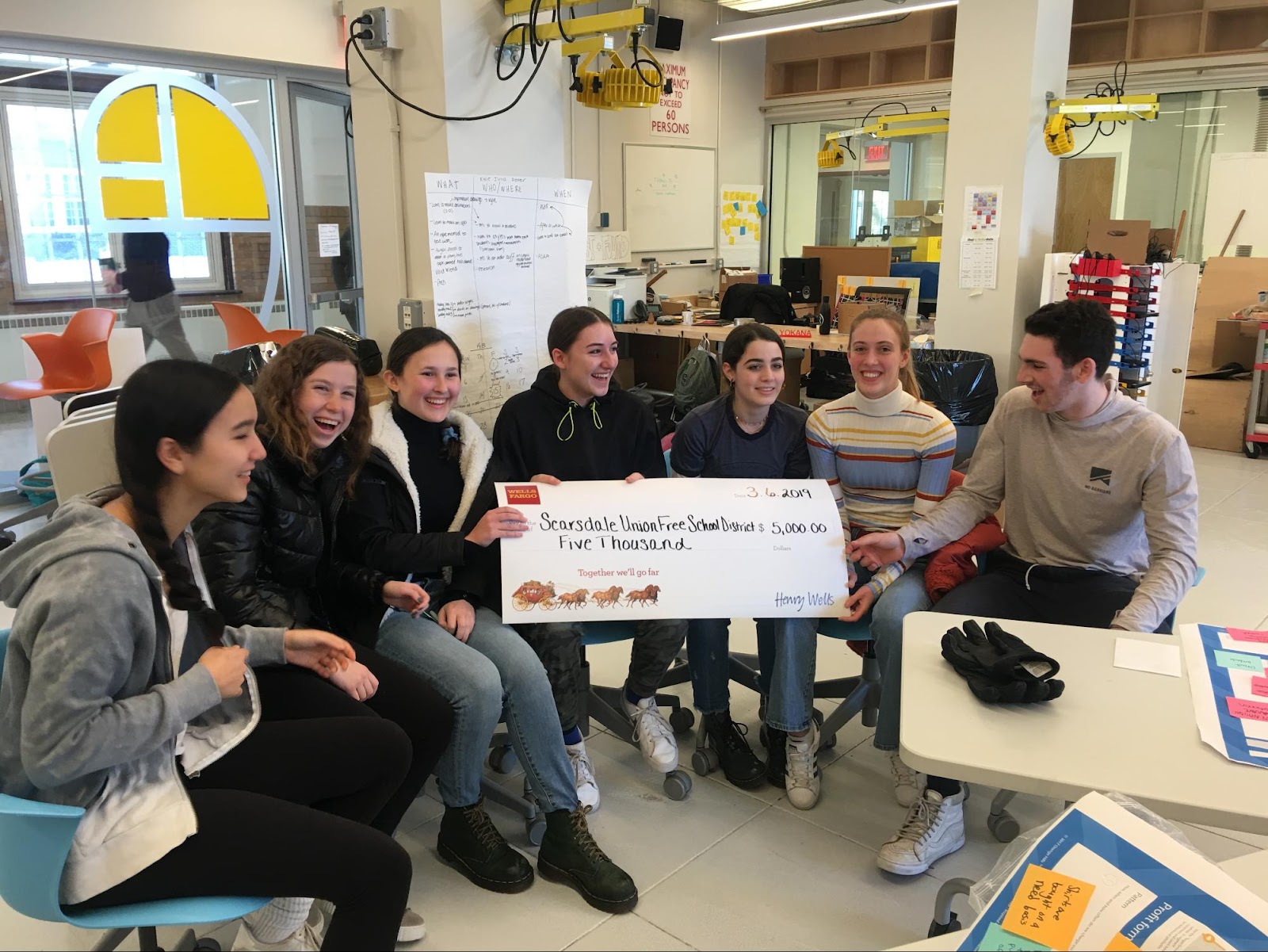 Posted by Lisa Yokana at 7:25 AM No comments:

More News From The Design Lab

Quarter Two was a busy one for STEAM classes in the Design Lab. Entrepreneurship students in our
full year, Advanced Topics course, who are designing for students with multiple and severe disabilities,
determined the problems they wanted to focus on and used the business model canvas to define the
value their products would create. They will continue to refine and iterate their prototypes and present
their results in a public forum at the end of the year.

Two of the second level electives, Design for Modern Production and Design/Build are working jointly
with fifth grade Edgewood students to solve problems in certain spaces at Edgewood. Beginning with a
field trip to Edgewood, teams of students, both high school and elementary, toured spaces and identified
problems. The teams have been simultaneously designing solutions, giving feedback to one another
via blog posts and Google hangouts. The high school students will build the solutions before the end
of first semester and present them to Edgewood students, faculty and administration. High school
students learned to work with younger students, helping them through the design process


Robotics students learned programming, building and mechanics through a maze challenge. Now,
after learning the basics, they are designing a grand prix race around the classroom and will run
time trials with their robots. Introduction to Engineering students have had a taste of robotics
through creating mini mazes to navigate with pre built robots and Design and Fabrication students
are seeking ways to add value to our school community.
Posted by Lisa Yokana at 6:22 AM No comments:

The STEAM program began its third year with over 300 students enrolled in the seven different
courses, all taught in the new Design Lab. The third level class, Advanced Topics Entrepreneurship,
taught for the first time this year, teaches students the skills and mindsets of entrepreneurs.
This year students are examining the problem space of adaptive design, a huge market segment
that many companies are just now considering. The class visited our partner The Sunshine Home
in Ossining, NY, on October 17th and spent the day observing, interviewing and talking with
students and teachers. Students are now identifying the problems they saw and will move
through the design process in teams, ultimately creating business models for sustainable
solutions as well as delivering viable solutions to their clients at The Sunshine Home. In
preparation for the trip, Entrepreneurship students attended the No Barriers Summit in
New York City aboard the Intrepid Museum, where they had the chance to engage in
diverse activities with people with disabilities. Experts in the field, including Matthew
Shapiro of Six Wheels Consulting, Dr. Peter Faustino, one of the SHS psychologists and a
Scarsdale student with a disability also spoke with our students in preparation for their visit to
Sunshine. Students are excited and engaged in the process and will present their results at an
open pitch night at the end of the year.
Posted by Lisa Yokana at 6:20 AM No comments:

Before winter break, students in Physical Computing/Wearables donated several boxes of toys to IAHD in Westchester. The donated toys were ordinary, remote controlled toys that the students had "hacked" adapting them for people with disabilities. They also made big accessible buttons to go along with the toys, making it easy for people with disabilities to push the buttons and control the toys. 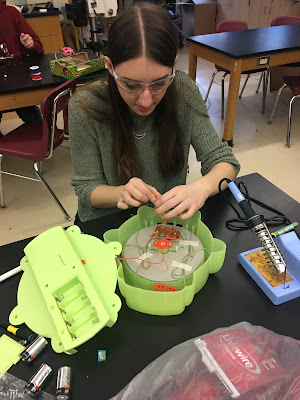 Two of the students had previously attended a toy hacking workshop at Adaptive Design Association, in New York City, along with Ms Yokana, to learn from the toy hacking experts at DIYability. There they learned the specifics behind taking apart the toys, identifying the switches and figuring out where to solder the leads to the new switches. Students learned that an adaptive toy, one made specifically for those with disabilities, can cost hundreds of dollars more than a regular toy. They also learned to make simple, big switches from cardboard, tape and aluminum foil. After spending a Sunday morning at ADA, they were all excited to teach their classmates and hack more toys. 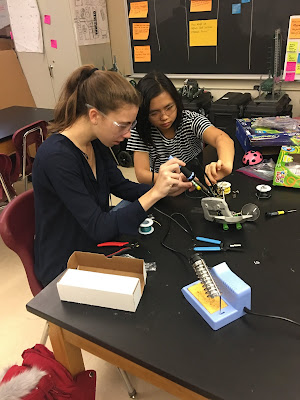 The speech pathologists at IAHD worked with Ms Yokana to identify toys their patients would enjoy. Then, SHS students went to work. Pulling apart the remote controlled toys, they soldered wires to the solder pads of the existing buttons, which they soldered to switch jacks. By soldering the switch jack onto the solder pads of the existing switch, they were adding a second switch to the circuit. This second switch could be attached to an accessibility button, which students had made. Students finished up there soldering and fitted the toys back together. 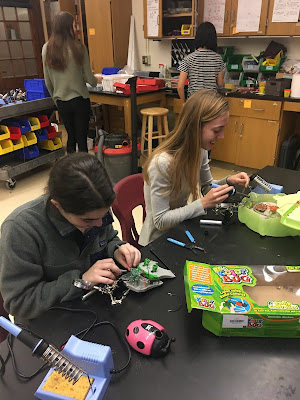 On the last day before winter break, the speech pathologists from IAHD came to accept the toys bringing with them one of the residents from their group home. The joy was evident the moment Rima saw the toys! She played with all of them and immediately picked her favorite: the bubble blower. Our students were excited to see how happy the toys made Rima. In one student's words, "It was so easy for us to do and it brought her so much joy!" They also all agreed that it was a great way to learn more about circuitry and electronics.

From Prototype to Pitch

Eric Walters, at Marymount, put together this anthology of stories by educators working with Design Thinking and Making. It's now available on ISSU: https://issuu.com/ericw808/docs/17prototypepitchfinal
I've written a chapter about how we, at Scarsdale, built the case and the mindset for Design and Maker education by working across disciplines to create lessons that can be done in classrooms. Once the Design Lab is finished, we will have teachers ready to use it and students who understand the value of constructing something to demonstrate their understanding of complex knowledge.
Posted by Lisa Yokana at 2:46 PM No comments:

Lately, I've been blogging for my school about the new STEAM courses that are running this year: introduction to engineering and introduction to design and fabrication. Check out the posts here: http://shsdesignlab.blogspot.com/ We just started our second semester teaching these two courses, in a Physics lab, in an effort to build the program before we have the space. At the same time, we have been planning for next year's courses and putting finishing touches on the Design Lab's plans. To learn more about the lab, watch this video: https://www.youtube.com/watch?v=C7XCYr11oPc&feature=youtu.be